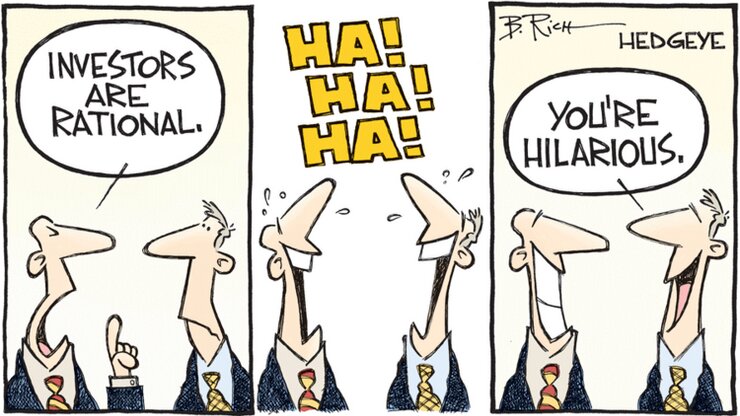 Are Investors Rational or Hilarious?

Money and Market are brain-children of humans that are evolving for centuries in terms of trade and exchange.

The human mind has been elementary in the evolutionary process with a triangle of progress in money, market and mindset.

Now, Finance being the product and multiplier of the 3 Ms, is it all about Money or Market or Mind?

The mushrooming concept in the decade is that Financial Behaviour is stimulated by the neurology of human minds towards stimuli.

From Behavioural Economics to Behavioural Finance, the outlook is narrowing to investor’s mindset to information and environment, shaping financial perception, attitude, behaviour, psychology and decisions.

Neuroscience in Finance is the new-millennial concept that could dispel traditional and Behavioural Finance to analyse well-performing economies or financial fragility.

Neuro- Finance shapes every individual’s financial behaviour at the microcosm and collectively constructs an economy at the macrocosm.

So, is Finance all about the mind?

Traditional market theory entails finance being all about imperfect market assuming that people process data objectively, appropriately and correctly from the lens of risk-return perception.

The three folds of finance theories culminate in the proposition that the funnel narrows to what’s all in the mind with access to money and the market.

The subjective behaviour towards finance fuelled by neural intricacies of every individual builds the ultimate financial decision enabled and influenced by purchasing power of money and place of trades and exchanges congregation, the market.

Results of what’s on the mind in Financial Behaviour

Financial Literacy is the aesthetics and heuristics of finance towards financial planning, decisions and well-being.

What are those Biases that can base and influence financial decisions creating a gulf of financial literacy and financial illiteracy?

Going by the stories to take a financial decision from peer groups, companies and data available is a very common bias investors fall into. Via heard stories, more storification happens which may be beneficial or vice-versa.

Following a parade and missing the beginning and the end! The bandwagon effect is a herd mentality of people to follow the group and subordinate one’s beliefs to what the crowd of the sheep flock does even if they end in an open well!

The face value of the organisation, repute and public image perception amongst the beholders influence steeply on the financial confidence and under-confidence.

An investor’s tendency to form and frame judgements about the market say stocks, investment options and prices at the face of information creates ripples of representative bias.

This can have an effect of causing investors to quickly draw patterns that might or might not consider the past pattern and a plausible futuristic trend.

This can cause an over-optimistic and over-pessimistic tendency easily from assumptions to information repute and ultimately value creation.

People’s refusal, adamance and stubbornness making them resistant to change despite a crucial requirement to change based on accurate new information is an anchoring bias.

Anchoring to one’s perception, investment or organisation’s reputation, besides that being wrong demanding a right behaviour would induce certain financial behaviour and mistakes. Critical Thinking is understanding the difference between need and greed!

Tendency to financial direction from the shell and comfort zone of familiarity results in the familiarity bias in finance.

This may result in duplication, repetition and revision decisions even when smarter and better choices exist.

Less clear and unclear information influences the interest of people in finance, influencing their degree of awareness and the way they decide to be informed.

Until ambiguity is cleared by the information source or from the effort of the receiver’s end, a gulf or a void may be created.

Innumeracy Bias is very popular for how people base their perception and attitude to numbers on financial behaviour.

FOMO (Feeling of Missing Out) from gains can cause regret to have availed the benefits of good moments.

Living and dwelling in past glories than past, present or future story of losses.

A result of an investment basket(s) driven by behavioural finance.

Shadow of the past

The tendency of past experiences of success and failure casting a tangible shadow in the present and future financial behaviour.

Jackpotting luck to an outcome of serendipity. Aggregating risk factor tendency to incur risks is an example.

Cautious financial behaviour to avoid harsh hits and failures due to past experience or hearsays leading to a conservative risk-tolerance level.

Trying to break even effect

Continuous or sudden effort deployed in off-setting losses with potential returns quickly or gradually to be on the wall than a cat at the loss side.

The cycle of bright and bleak emotions affecting decisions to invest and the financial goals from hopes to fear, anxiety to anticipation, regrets to pride.

Intensity of information lacking any chance of control surging to forced decision making can induce erratic or balanced financial behaviour.

It’s all in the mind of what you do with money, on and off the market.

Yes, it’s all about the mind

Cultivate a Financial Psychology to,

Train the mind to financial literacy of best utilization of money on and off the market.

Subscribe to The Fin Lit Project and join our community of finance enthusiasts to make better and informed financial decisions by Embracing Financial Literacy!