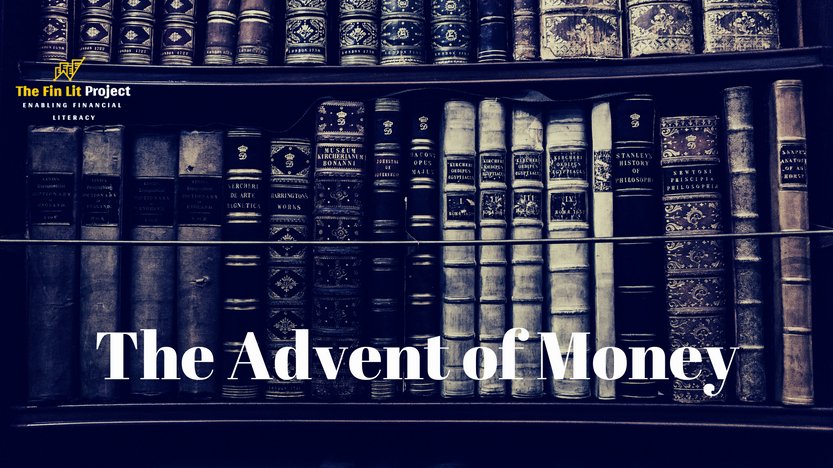 The Advent of Money

Even before the birth of history as we know it, humans were exchanging goods and services by swapping various items that were of value to them. This included meat from animals hunted by the tribe (a small coherent group of hunter-gatherers) or sweet fruits gathered while wandering around the countryside. As humans learned to use stone-age tools, they discovered glittery semi-precious stones near riverbeds. They also made beads of animal bones (to use as an ornament) and used animal skin & fur to keep themselves warm. They then attached a symbolic value to each one of these items and exchanged goods and services using these items within the tribe and sometimes within nearby tribes.

With the discovery of agriculture and taming of animals to be used as livestock, humans had more time at hand and felt the need to exchange more and more items. Thus, humans developed a barter system, to exchange one commodity for the other. This system, however, had inherent inefficiency as the value of a commodity (say a bushel of wheat or a pound of meat) was not fixed and was always negotiable depending on supply and demand pressures plus the barter system required double coincidence of wants. Let us say, if a sack of barley fetched three lambs normally, but around harvest season when there was abundance, the same sack of barley would get a person only one lamb. This remained a bone of contention that could lead to conflict and bloodshed.

As more and more of the pre-historic tribes came together around a fertile river basin leading to the birth of civilization, humans started creating markets to allow larger and more efficient exchange of goods to happen, the need was felt to have a standard medium of exchange. Around this time, large granaries in ancient civilizations of Indus valley, Mesopotamia, Egypt, Babylon, and China came up to store food grains during the time of abundance for use at a time of scarcity of food. During this time, humans also discovered the use of measurements and used seeds and stones as a measure of mass (a good example is carat which is still in use to measure the mass of gemstones and is derived from the weight of one carob seed). This system improved efficiency which resulted in humans having even more spare time which was utilized to develop law and philosophy. Around this time in Babylon, the Code of Hammurabi was being decreed by King Hammurabi. This also led to humans discovering the power of promise – they could exchange goods and services in present with a promise to provide something of similar value in future. As always human ingenuity keeps on looking for ways and means to minimize labor and maximize gains. So, these promises also turned out to be fickle over a period as people realized there is nothing holding them to keep these promises.

To tide over this problem, Semitic people and Carthaginians developed the use of shekel – a unit of measurement of barley which was used to trade. This was used as commodity money using which one could redeem the same quantity of barley. The Babylonians developed their own system of King decreed promises similar to legal contracts and debt to indulge in trade. These may have been used at granaries to redeem food grains. The promises were initially written in clay tablets which would later be reduced in size for ease of transportation. With the advent of the bronze age the civilizations reduced the size of these promises even further and with the increase in the amount of trade, moved to a better and efficient system of metallic coins which had the figure of kings adorning them as a symbol to stand guarantee of their value which made trade possible using these coins. Ancient Indian civilization was one of the first ones to make use of metallic coins for trade and these coins were introduced in India around 3rd century BCE. These metallic coins turned out to be more durable and the ease of storage and portability led to more efficient trading and well-being of entire civilization and human race.

The development of pictorial scripts, hieroglyphs and full text scripts resulted in more efficient communication and exchange of ideas. This also gave rise to an increase in human ambition and greed and need to capture more and more fertile land for the cultivation of even larger quantities of food grains. To fund the insatiable appetite of Roman empire to wage war and subjugate more lands under itself, Roman Emperors authorized the addition of tin to silver for minting denarius (silver coins) and copper to gold for minting aureus (gold coins) in order to have more coins to pay its soldiers. This led to an abundance of these coins in the empire resulting in a fall in the purchasing value of money. This later led to tin replacing silver completely for minting denarius resulting in everyone minting their own money leading to collapse of the roman economy. This could be treated as earliest historical record of inflation.

The minting of coins and trade using them went on for some time until 7th century AD when Merchants of Tang Dynasty developed a system of issuing promissory notes on paper for large value transactions in order to avoid transportation of large bulk of copper coins. Through the Mongols, the system of promissory notes reached the middle east and during the crusades Europeans also came to know about it. Soon Bankers and traders started issuing these notes in Europe by depositing an equivalent amount of gold and silver in the royal mints and these notes began to be backed by Sovereign guarantee and were issued under the seal of the monarch. As European science and technology developed during the renaissance period so did the amount of international trade being undertaken by them. They conquered and colonized the world and European traders amassed more and more wealth. As they stored their wealth at royal mints, the power of European monarchy also grew parallelly.

Of all European monarchy, the British crown was able to colonize the majority of the world. At the height of its power, the sun never set in the empire from United States to India and Australia to Caribbean. The English traders amassed majority of the gold around the world and brought it back to Britain. Soon enough goldsmiths in London started storing this gold in their private vaults and started issuing promissory notes of their own redeeming them with the equivalent amount of gold held in their vaults. As the trade complexity rose, these goldsmiths developed a kind of banking system similar to modern banking where they would not charge any money on the deposits and even paid interest on the deposit. They also issued loan advances and funded trading voyages which gave them hefty return on investments. This can be aptly called the precursor to the modern-day banking system and history of some of the biggest British banks can be traced back to these goldsmith bankers of London. As the British empire was spread far and wide, soon enough there were Banks in United States, Canada, India and Burma issuing banknotes. However, banknotes issued by the largest and most creditworthy banks which could convert them to gold and silver bullion on requirement were the ones that were widely accepted.

From then to now:

With the advent of computer age, more and more banks found the use of computers for accounting more rewarding as it reduced the labor required for maintaining ledger. Not only this the advances in computing in the 1990s also brought in the Information age where one could undertake complex calculations within seconds and communicate it at an even faster rate. The modern banks quickly realized the efficiency and cost-effectiveness of this system and soon enough money was converted to digital form and stored in the secure electronic ledger of these banks. The time required for each transfer was drastically reduced and the traveler’s cheque for international transactions soon became redundant.

Modern money is stored and transferred digitally. As of today, more than 60% of global money exists in digital form and almost 58% of monetary transactions are electronic. The human innovation does not stop at this. From centralized financing, we are moving towards decentralized distributed ledger technology – popularly known as the blockchain. This technology has given rise to a newer form of money called cryptocurrency wherein the information is decentralized, peer-to-peer and tamper resistant. These are exciting times as we are living in a day and age where we can see history unfolding in front of our very own eyes and making an impact on our lives. It took somewhere around 5000 to 7000 years for humans to move from a barter system to metallic coins, 1000 to 1500 years to transition from metallic coins to banknotes, 700 – 800 years to transition from banknotes to digital currency and within a span of 30 odd years, we are in the midst of a transition from digital to cryptocurrency. Only time will tell how the future of cryptocurrency would look like. But this truly shows the trajectory that money has accomplished in all these years.

Subscribe to The Fin Lit Project to learn more about finance in a simple, no jargon way and embrace financial literacy today.